The Benefits of Muay Thai 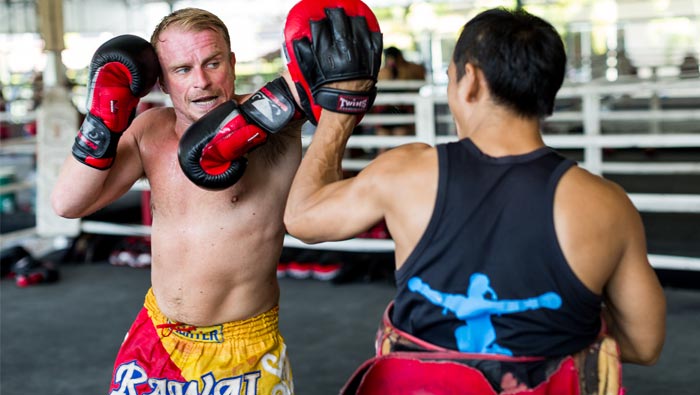 Train with Us and Reap These 8 Benefits of Muay Thai And Take Your Fitness to A Whole New Level!

So, you’ve been considering Muay Thai Training and have come all the way to Thailand. Perhaps you already have some experience with martial arts. Either way, you’re in luck because you’re in the land where a very powerful martial art originated, popularly known worldwide as Muay Thai. And what better place than to experience it in than Thailand itself. Today’s article will highlight some of the top benefits of Muay Thai that is sure to get you excited to try this amazing martial art. And if you come to Rawai Muay Thai, you will have the chance to train under some of the best Muay Thai Trainers in the world.

Perhaps you are unsure because you don’t know much about this martial art? Then you’re in the right place. Along with the top benefits of Muay Thai, this article will also give you a good understanding of this powerful martial art. So, let’s begin by understanding the roots of this combat style and what makes it different from the other martial arts.

Muay Thai, which means ‘Thai Boxing’, originated from a much older martial art called Muay Boran – literally translating to ‘Ancient Boxing’. This combat style was fierce and raw but effective in warfare, which is why even the Thai military practised it. As the times changed, specific rules were introduced, leading to different versions of this martial art. The most popular one, as we know it today, is Muay Thai.

Given the numerous martial arts out there, surely you must be wondering, what makes Muay Thai stand out? The primary difference between Muay Thai and the rest would be that Muay Thai uses 8 body parts to hit with instead of the usual 4, which is usually the standard. These are the elbows and knees, which are used along with the fists and feet. Using these, Muay Thai can very effectively execute long, mid and close-range attacks, or if the situation demands, even use them for grappling moves, called a ‘clinch’.

Each of these strikes and moves requires extreme agility and strength training to be executed correctly. And since Muay Thai requires you to perform many consecutive strikes, this kind of training will boost your strength, agility, endurance, and stamina over time. Due to the extreme focus and clear-headedness that this martial art demands, the benefits of Muay Thai also extends to improving your mental health. Since you’re seriously considering picking up this martial art, let’s now see what exactly are the top advantages of learning Muay Thai.

Muay Thai training is hard. Even before you get to the proper martial art of it, Muay Thai will require you to practice many cardio type activities such as running, jumping ropes, kicks etc., that is enough to tire you out. But that is only the warm-up. You can only imagine how hard the actual training would be. And true to its reputation, Muay Thai puts a lot of stress on the cardiopulmonary system. This is an integral part of the training since it prepares your body for the countless consecutive striking moves you have to pull off in Muay Thai. With regular practice, your cardiovascular system gets strengthened to match the demands of your training.

Strong legs are one of the benefits of Muay Thai that is most readily noticeable if you’ve ever seen one of its matches. This martial art requires a lot of footwork, and the lower body has one of the essential roles in pulling off the various Muay Thai moves. As you learn the different Muay Thai kicks, you undergo a lot of conditioning, which strengthens your entire lower body musculature. So now you know why those Muay Thai fighters have not just great-looking calves but inhuman kicking strength as well!

#3:  Improve the Mobility of Your Hips

Good mobility and flexibility is a crucial part of martial arts and fitness in general. Yet many times, even fitness enthusiasts miss out on this vital factor and limit themselves to developing their fitness in only 1 or 2 planes. Here’s where the benefits of Muay Thai come in handy. Muay Thai training uses a lot of knee movements, resulting in improved hip mobility. Such kind of training ensures you work out all three planes of motion, which are necessary both for overall fitness and preventing injuries.

It is a known fact that a solid balance and stability prevents injuries. It is even more critical to have a good balance if you’re into any fitness activity. Many Muay Thai strikes involve kicks, and, as you know by now, the practitioners are expected to execute many such consecutive strikes. This kind of training drastically improves balance, which is crucial in combat situations and daily life. And if you’ve ever suffered an injury due to poor balance, then you probably understand why good balance is one of the top benefits of Muay Thai.

So now you know that executing those consecutive strikes vastly improves your balance. But that is just half the story. Apart from just balance, it boosts your endurance by building your core muscles. All those strikes with rotational motion, and even the grappling and defence moves, strengthen your core. In combat style training, you will, of course, make mistakes, which means taking a few blows. This, too, over time, helps to condition and build your core muscles. In this way, with the help of strong core muscles, Muay Thai helps you not just to pack a solid punch, but, if needed, take one too!

#6: Hits all the components of fitness

So far, we mention the benefits of Muay Thai being aspects of fitness like stamina, endurance, flexibility and balance. These are part of the 10 components of physical fitness. These 10 elements comprise what we identify a “fitness”, and in a single Muay Thai class, you almost hit all 10, making Muay Thai Training a complete workout. The 10 components of fitness are Speed, Strength, Stamina, Cardiovascular Endurance, Accuracy, Power, Flexibility, Agility, Balance and Coordination. Unfortunately, strength and Powers are usually missing in a Muay Thai class. That’s why missing it up with explosive and weight training can help.

Muay Thai strikes are super-fast. And they keep on coming one after the other. As you begin learning this martial art, you will often face powerful strikes and probably get struck by a few of them. It is especially so at Rawai Muay Thai, where you get to train and spar against some of the best. Often you will find yourself in such a spot, with no time to think. During such times, deciding between throwing a counter punch, blocking the strike, or simply avoiding it can be quite difficult. However, muscle memory will kick in with regular training, making you react appropriately to an oncoming attack. In other words, Muay Thai will give you super-fast reflexes!

Stress is very often given less importance than it deserves. Many people tend to realise the harm stress causes only when it has reached a serious stage. This is because the daily lifestyle of most people includes stress-inducing activities. The stress bucket explains how these stressors accumulate over time and need a timely release to avoid physical and mental health consequences. Lucky for you, Muay Thai is a very effective way to release some of that accumulated stress. Throwing a few punches and kicks at a bag or even a light match with your sparring partner, under the guidance of a good trainer, helps release a lot of stress.

To learn and practice the various Muay Thai moves, you need to maintain complete focus. This requires a high level of concentration. Which means you keep a clear head, absolutely distraction-free. This is especially true if you are in a sparring match or a real-life combat situation. How else will you defend or counter against the opponent’s incoming attack? This practice of maintaining focus through a clear head and a quiet mind helps reduce anxiety.

These are some of the ways Muay Thai helps you to improve your physical and mental health. However, being a high-level fitness activity, it does take its toll on your body. Hence, it would be quite wise and practical to pick up some activity post-training to help relax the body. Which is incorporating our yoga classes would work so well together. Also, after each training session, getting a good massage or jumping on the foam rolling for a bit will help.

By now, you should have a good idea why Muay Thai has become so popular worldwide. And not just in the mixed-martial-arts scene for its effectiveness in combat, but also as a means to improve your fitness levels. It’s is, of course, easy to get over-enthusiastic about being a super fit martial artist. That is why good trainers at reputed gyms, such as at Rawai Muay Thai, will always make sure you do not end up with overtraining symptoms by going overboard. That, however, is an extreme case. By maintaining common sense and listening to your body as well as the instructor, you are sure to reap the many benefits of Muay Thai. If you have any experience with this martial art, share it in the comments below and help inspire others to take the next step to fitness!